We left Rotorua and went up into the Te Urewera mountains to Lake Waikaremoana. Google maps had the drive estimated at about 2 1/2 hours, but they had obviously not driven the road because it took closer to 4 hours. A good portion of the road was not paved, but the dirt sections were graded and in pretty good condition. We knew in advance that the road had unsealed sections, but the drive was well worth the extra drive time because the road took us into a secluded and relatively untouched area within Te Urewera National Park. The landscapes and native forests were extraordinary.

As we got closer to the lake, we drove along a gentle river that gained force and grew into a torrent.  Then we saw an amazing waterfall...followed by several more.

We spent the night at a motor camp on Lake Waikaremoana. The camp had simple cabins for accommodation, and we stayed in one with a bedroom on the main level as well as a small loft. The kids were thrilled to sleep up in the loft, and we explained that they were sleeping in the "barn" loft of a because they are pretty fascinated with farms these days. (We immobilized them with straight jackets and had them sleeping in their cots/pack n' plays so they couldn't fall out of the loft in the night.)

After a good night's rest, we went on a very short walk to Papakorito Falls and then a longer hike through the forest. We really enjoyed the forest walk because the trees were amazing. One tree was a highlight by itself with a 13-foot diameter trunk. We found it especially interesting to see the native trees and plants because they're different from those back in North America.

If you look closely in the photo, you can see wild horses down by the water. 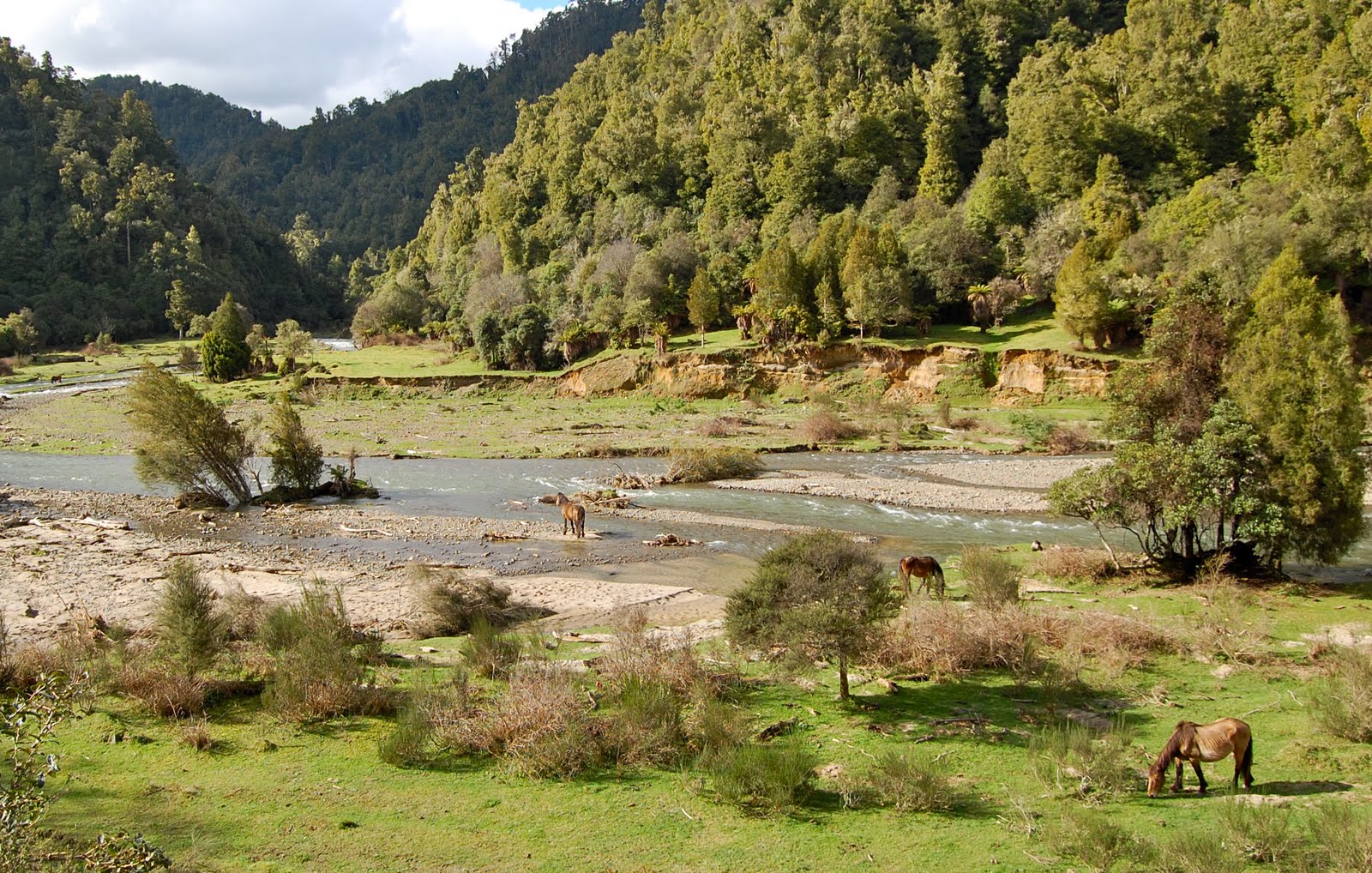 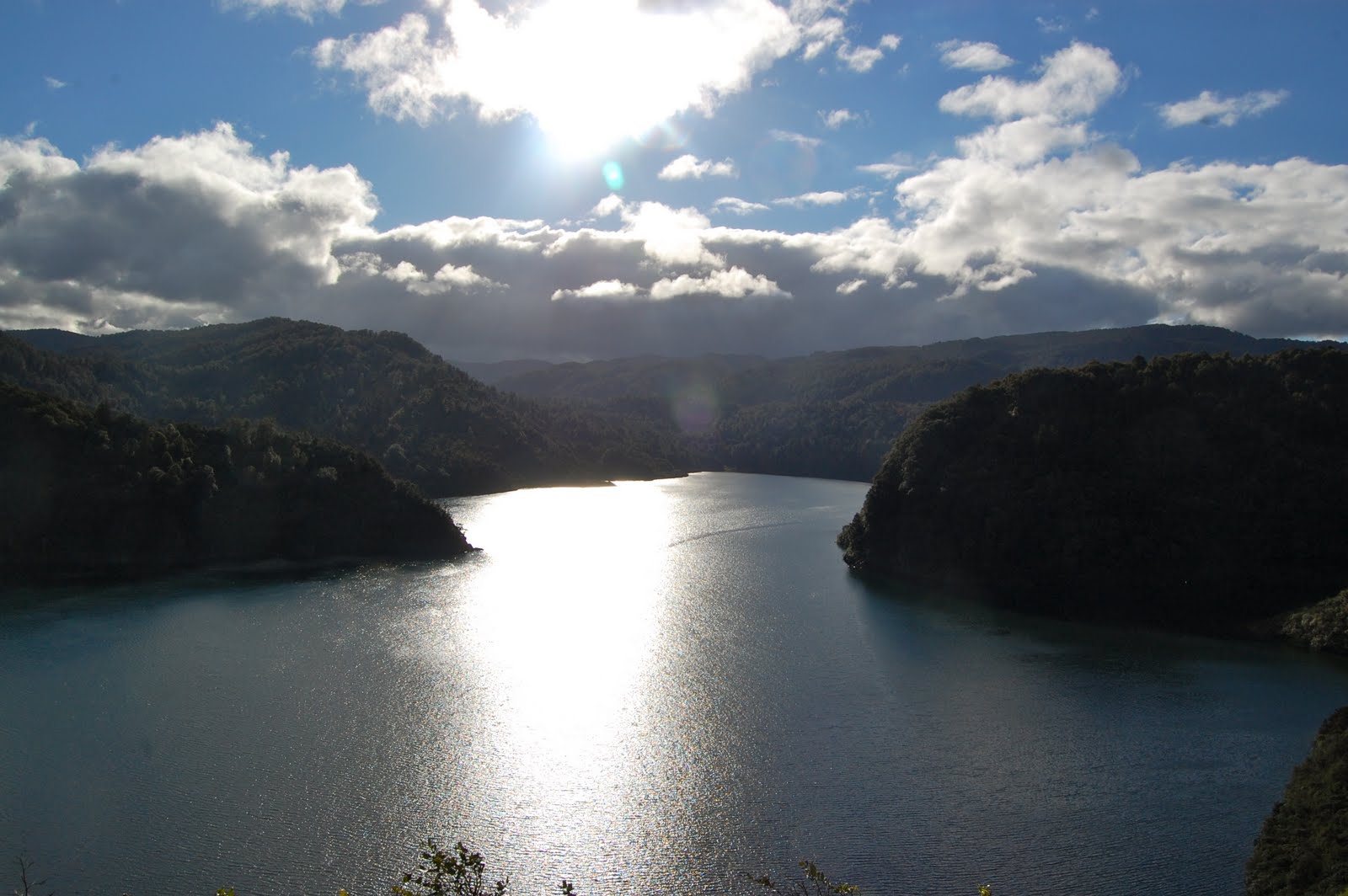 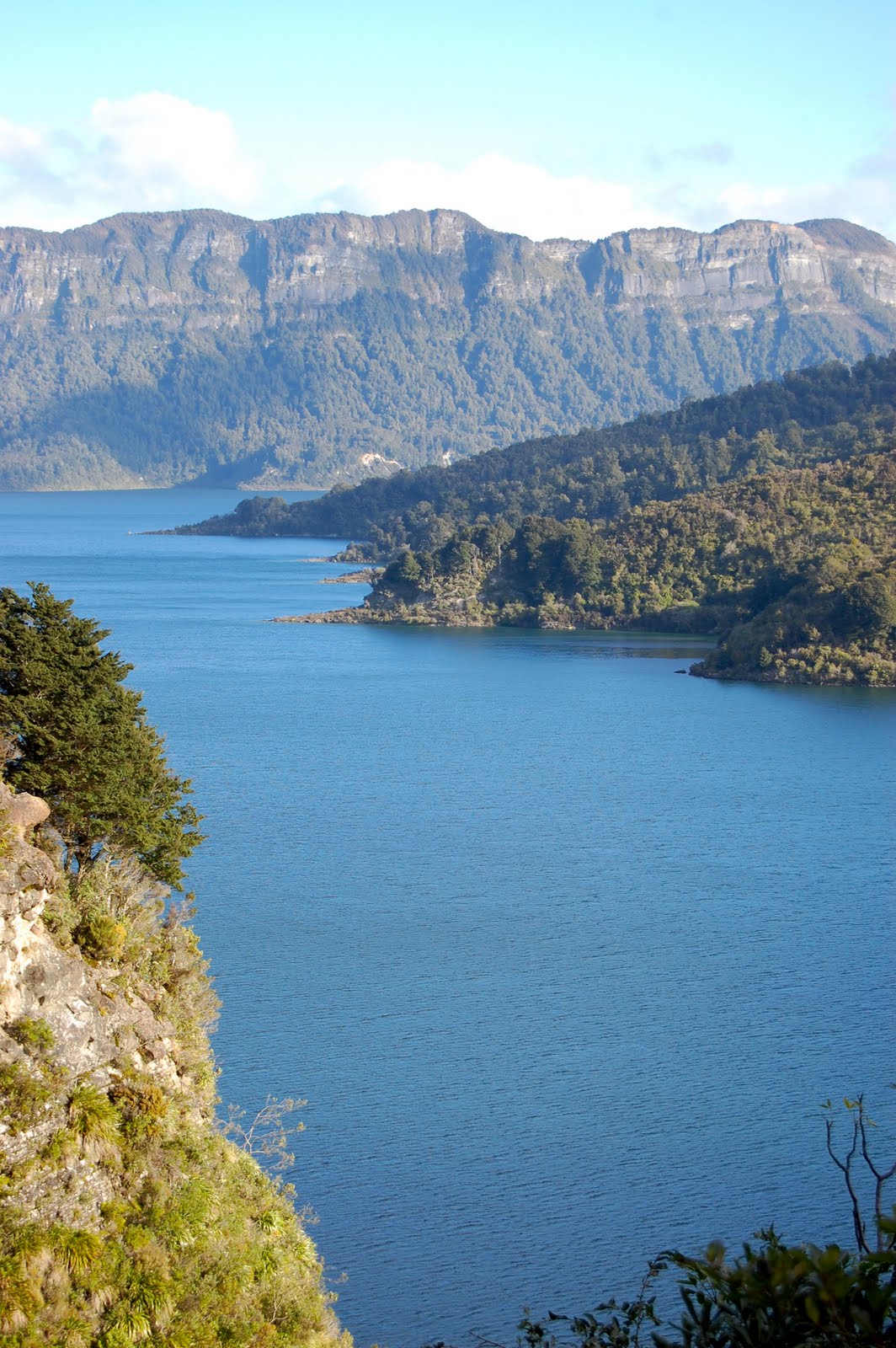 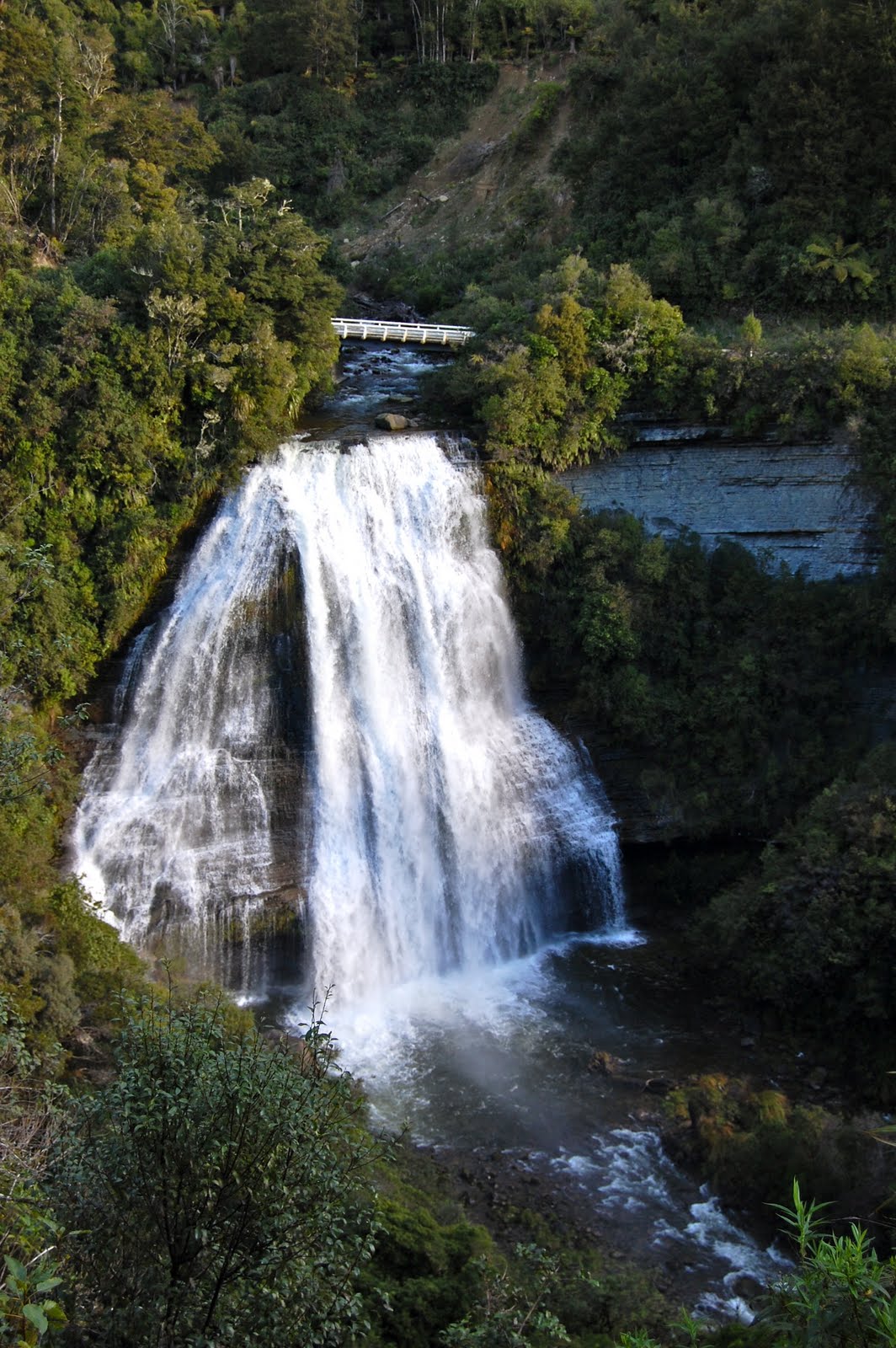 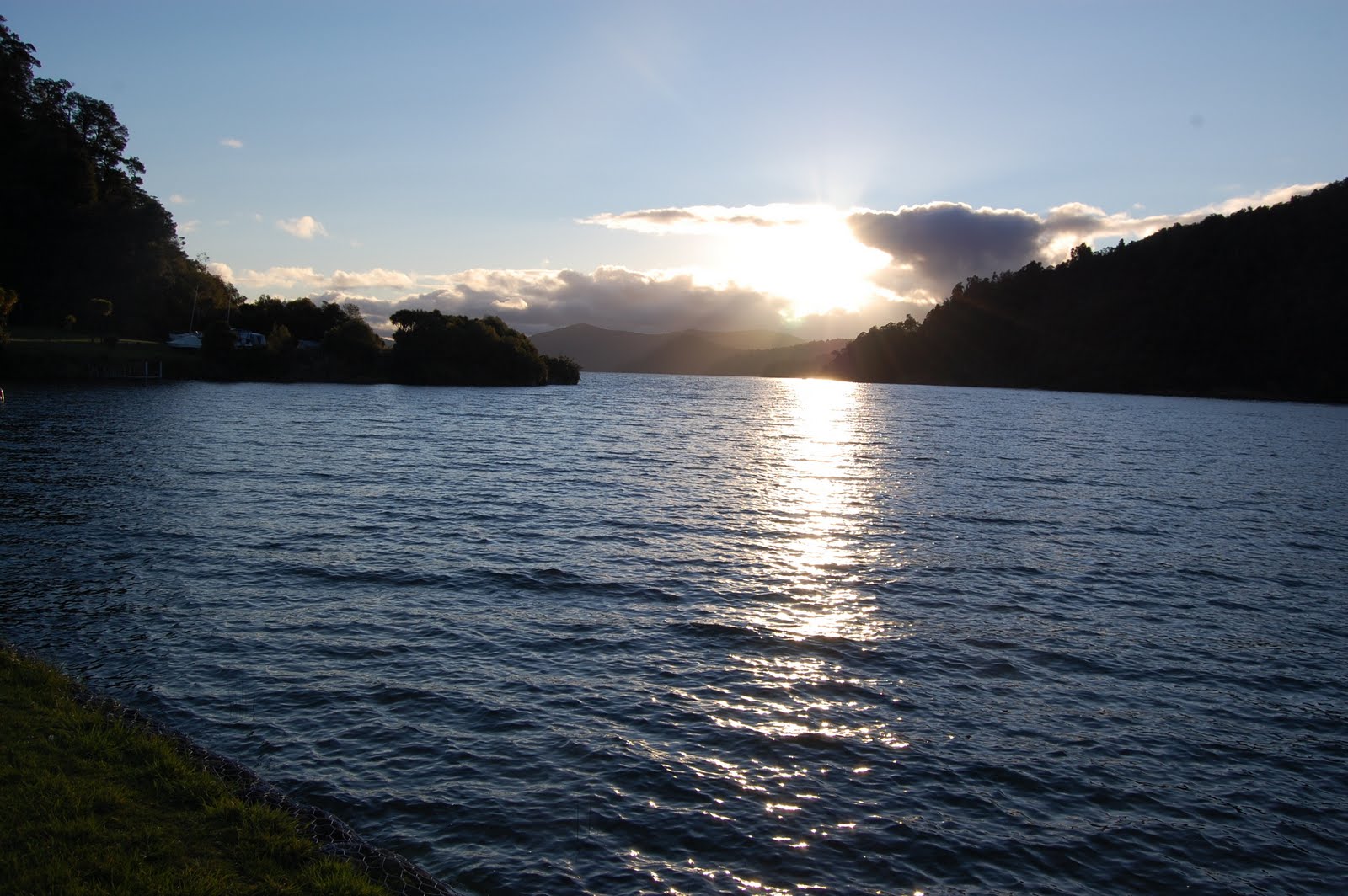 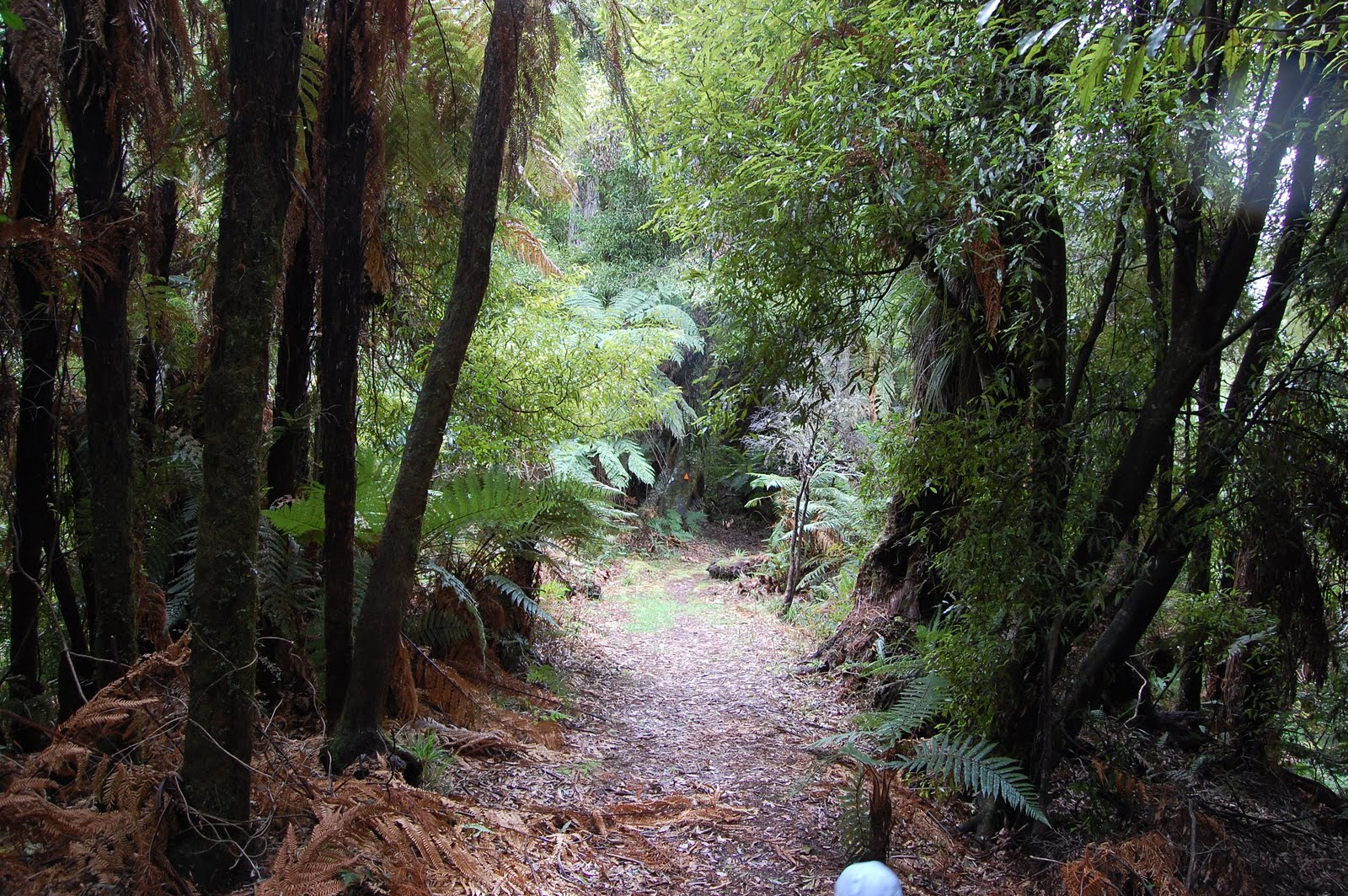 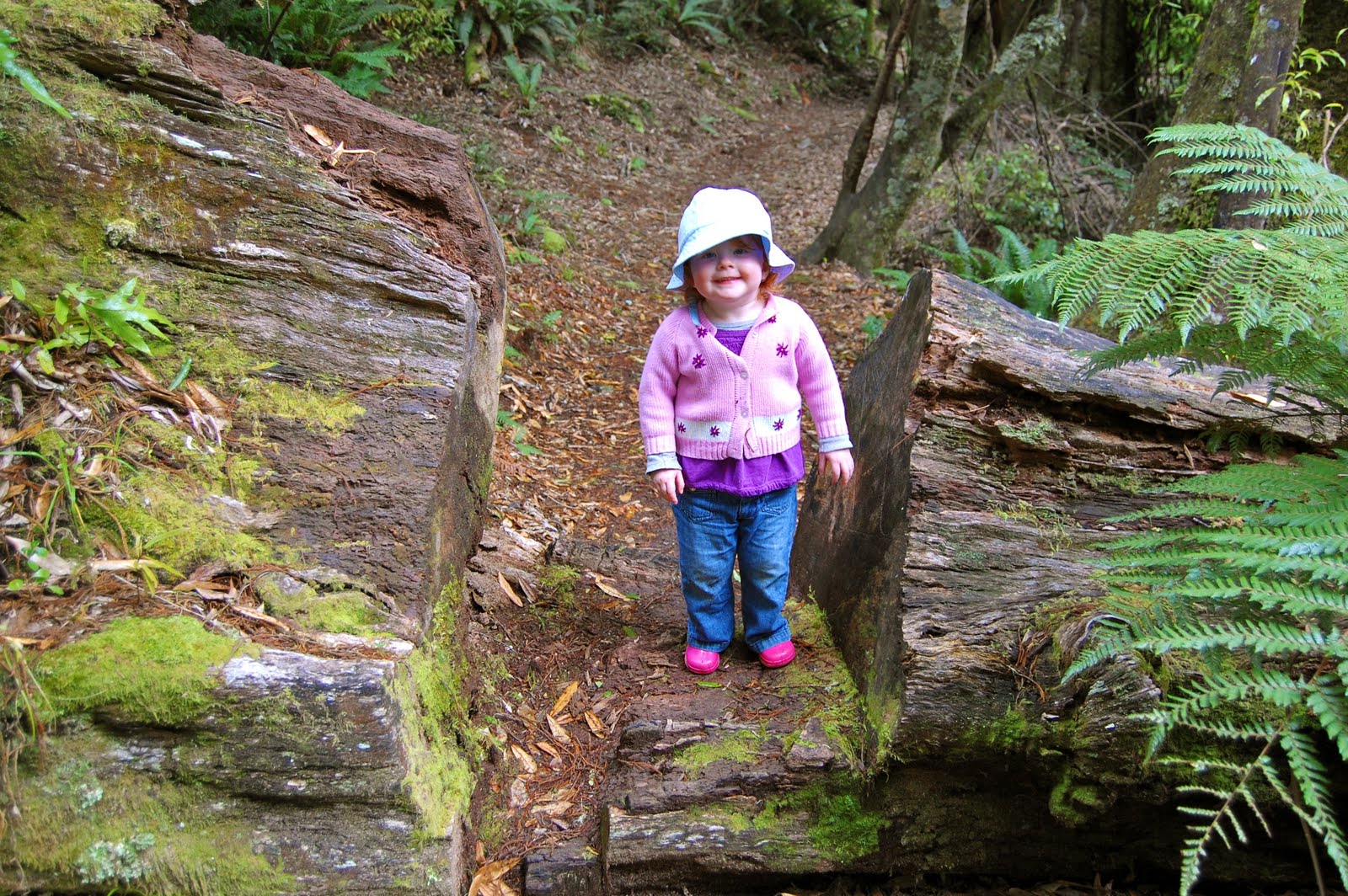 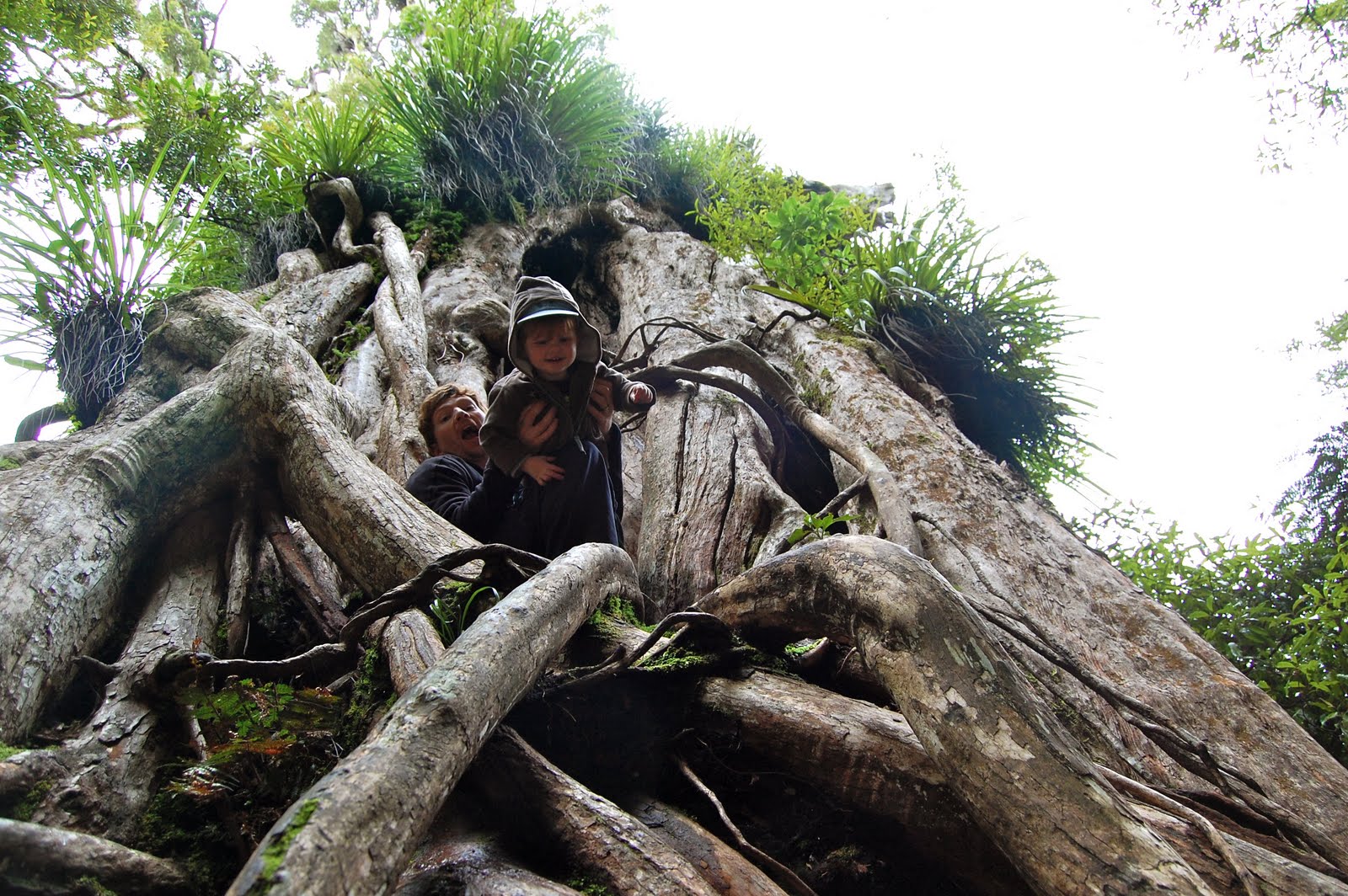 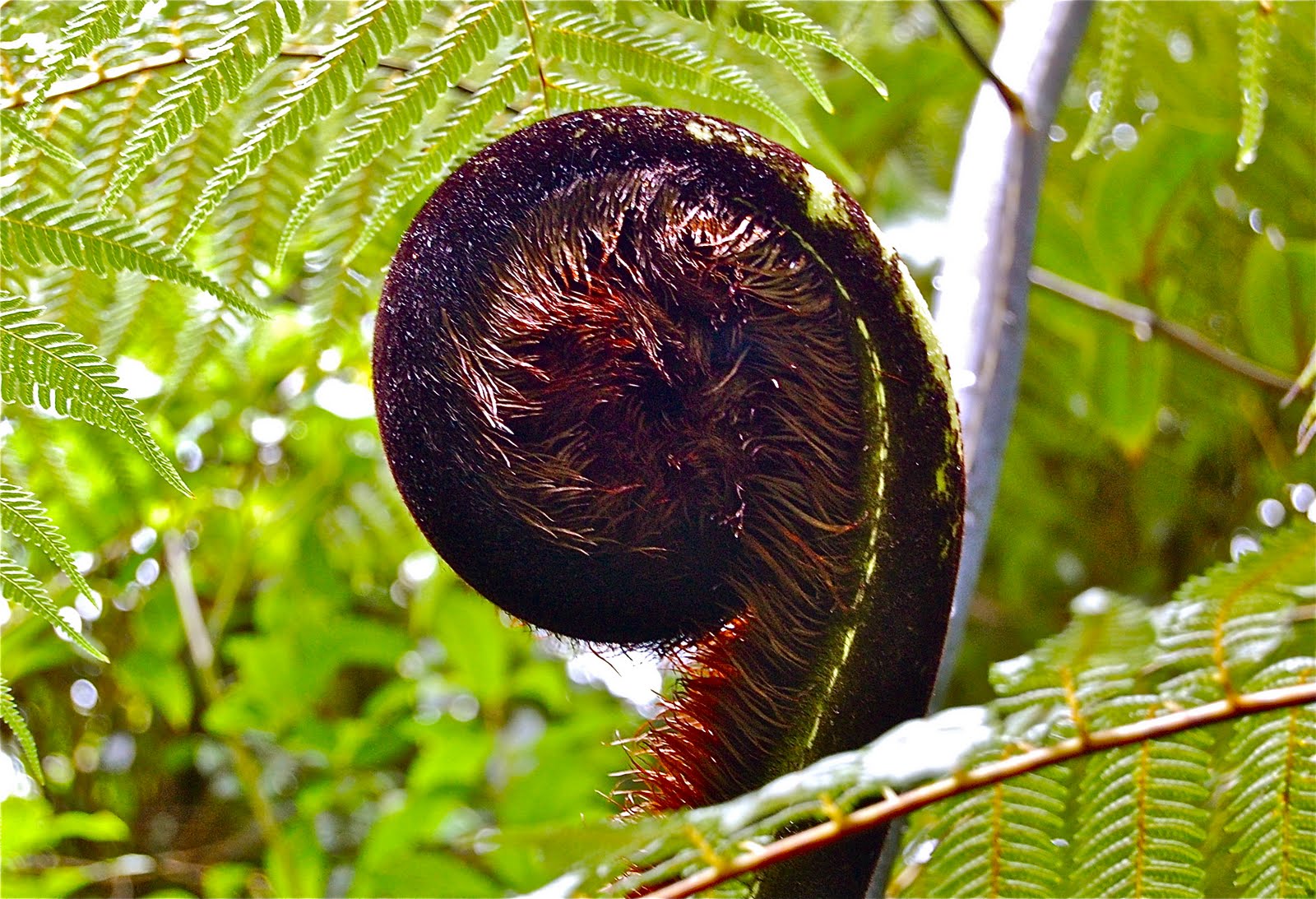 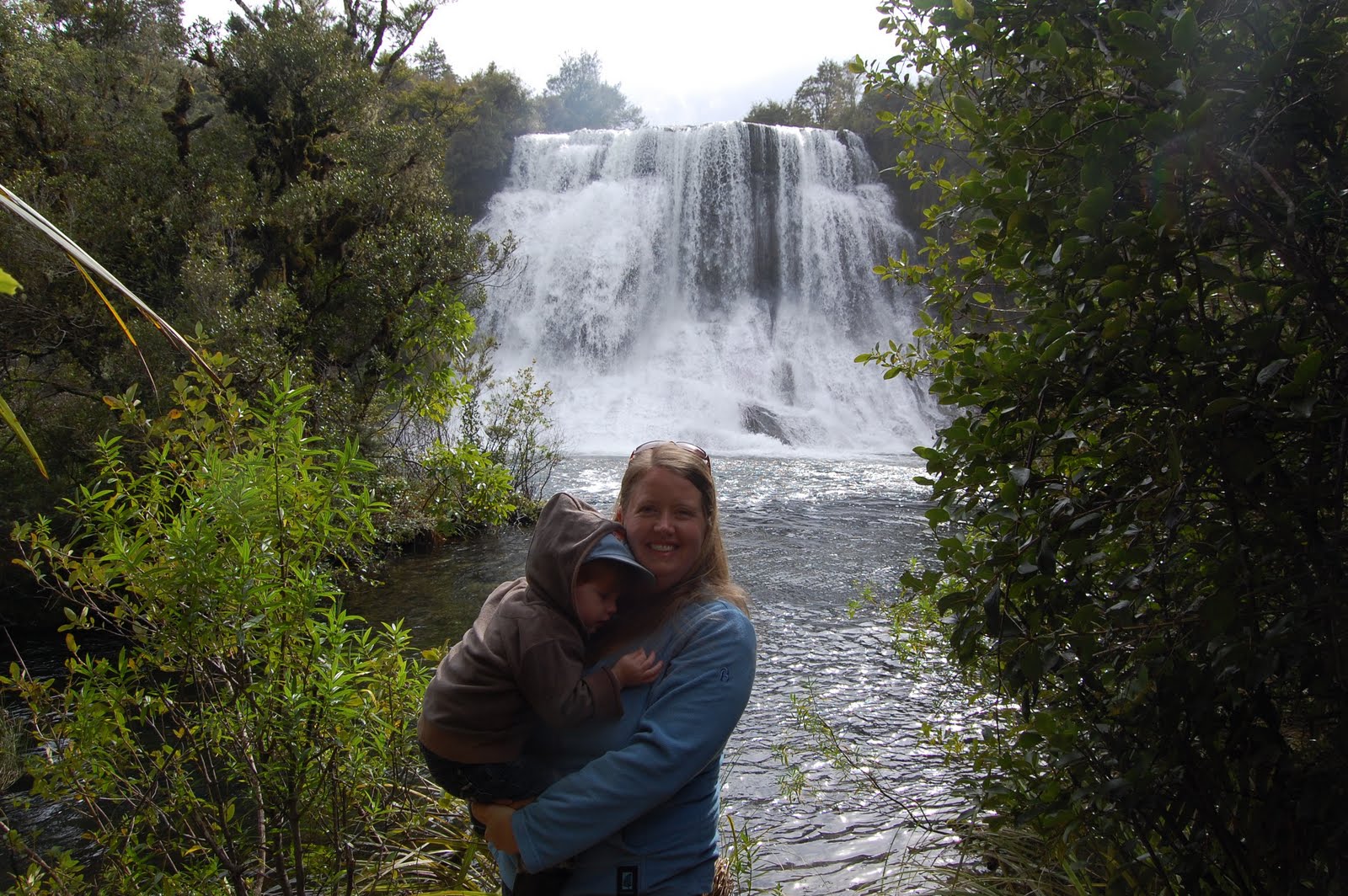 Posted by rusted sun at Saturday, September 25, 2010 4 comments: Links to this post

Rotorua is known for volcanoes and geothermal activity with a number of different geothermal areas to visit in the vicinity. Having a geologist in the family, we couldn't pass up an opportunity to enjoy the scenery. Following the recommendation of another geologist we met in the public park, we decided to take a trip out to Waimangu Volcanic Valley, which is a geothermal area that formed as a result of the eruption of the Tarawera volcano in 1886. The Waimangu geothermal area includes a series of geysers, hot springs, and lakes located in craters that formed during and following the 1886 eruption.

The kids spent most of the time in the backpacks pointing and telling their slaves where to go, but they also did a bit of walking on their own.
Lonnie and the kids surrounded by mist from Frying Pan Lake. 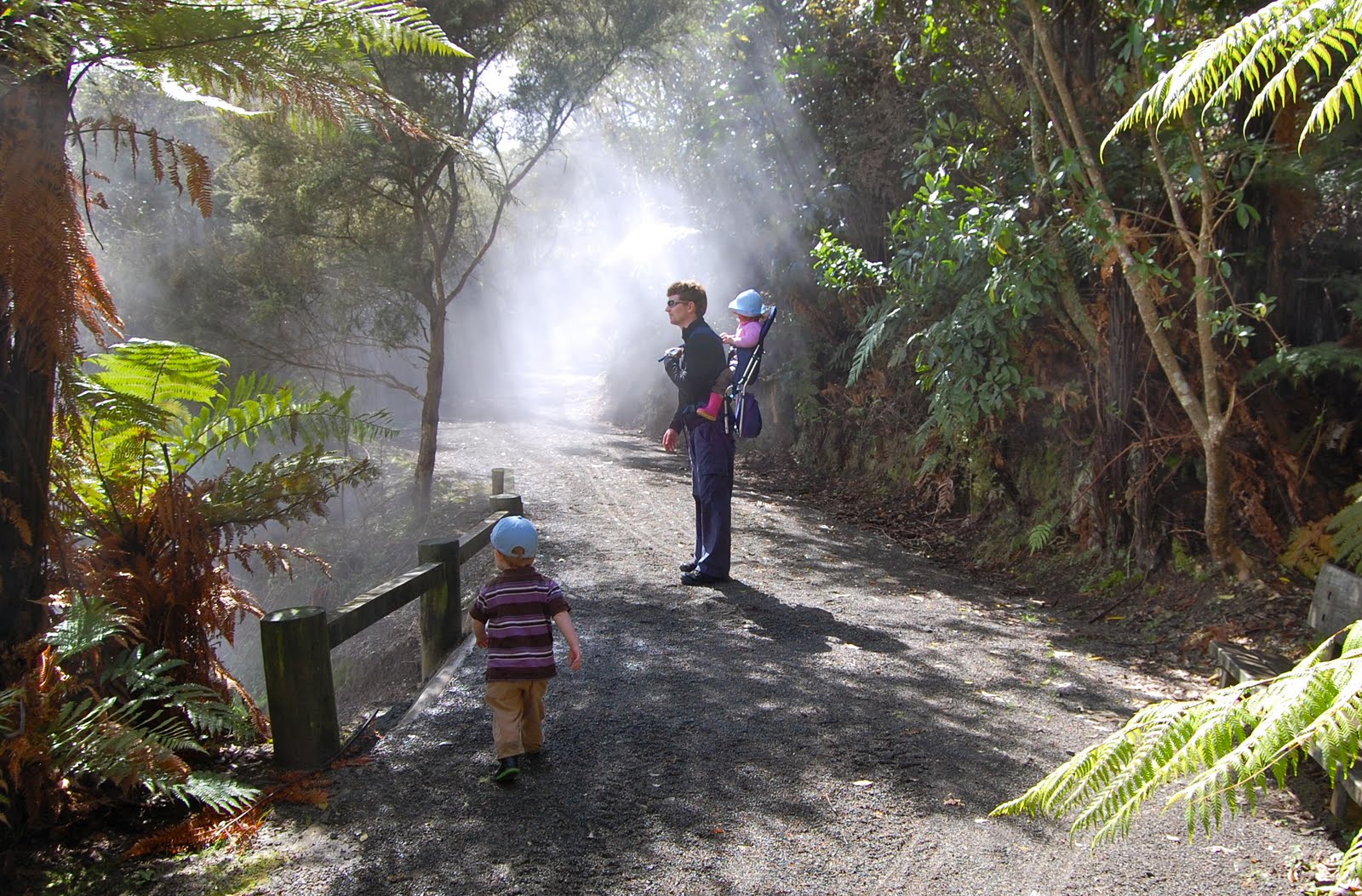 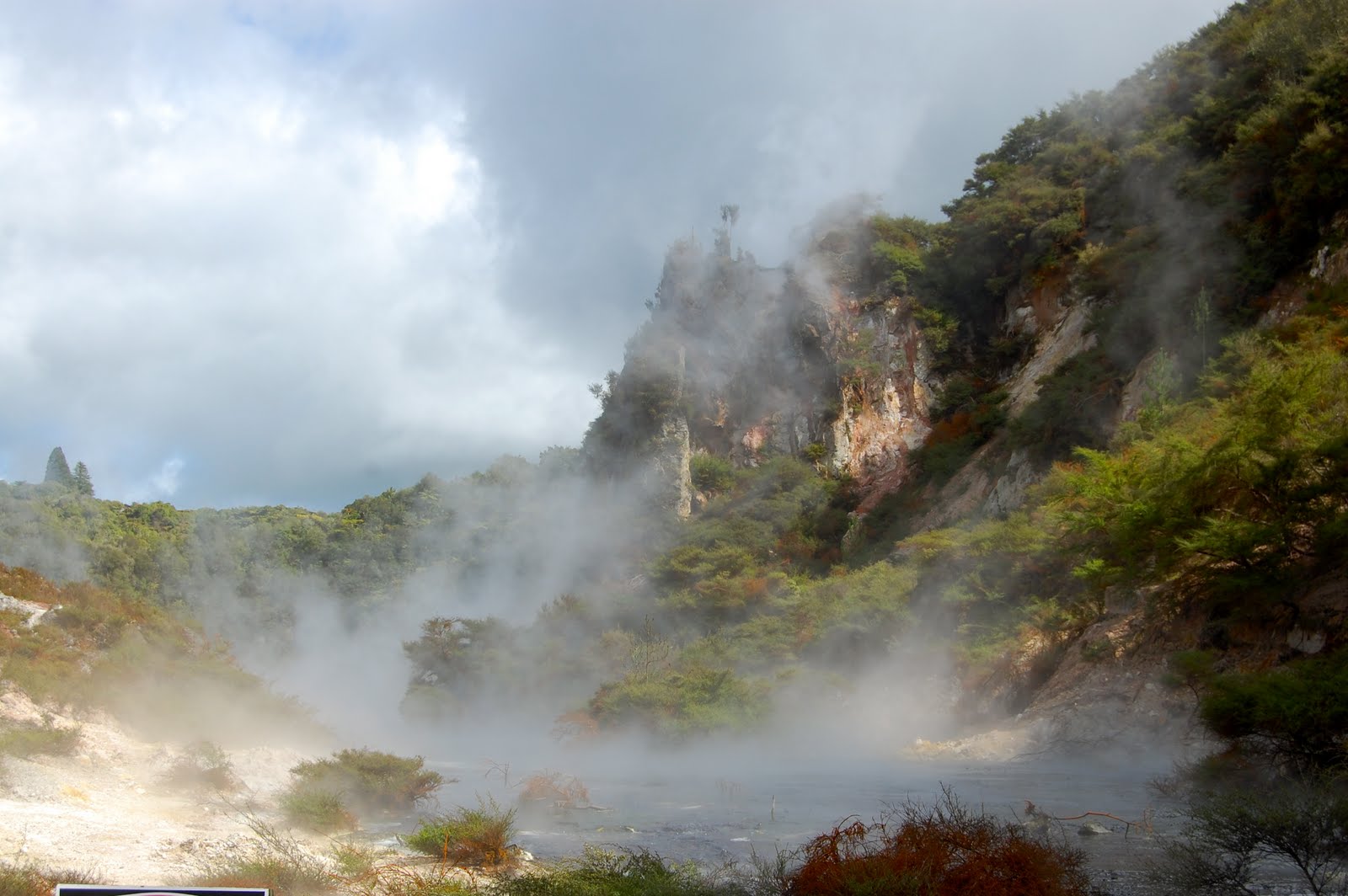 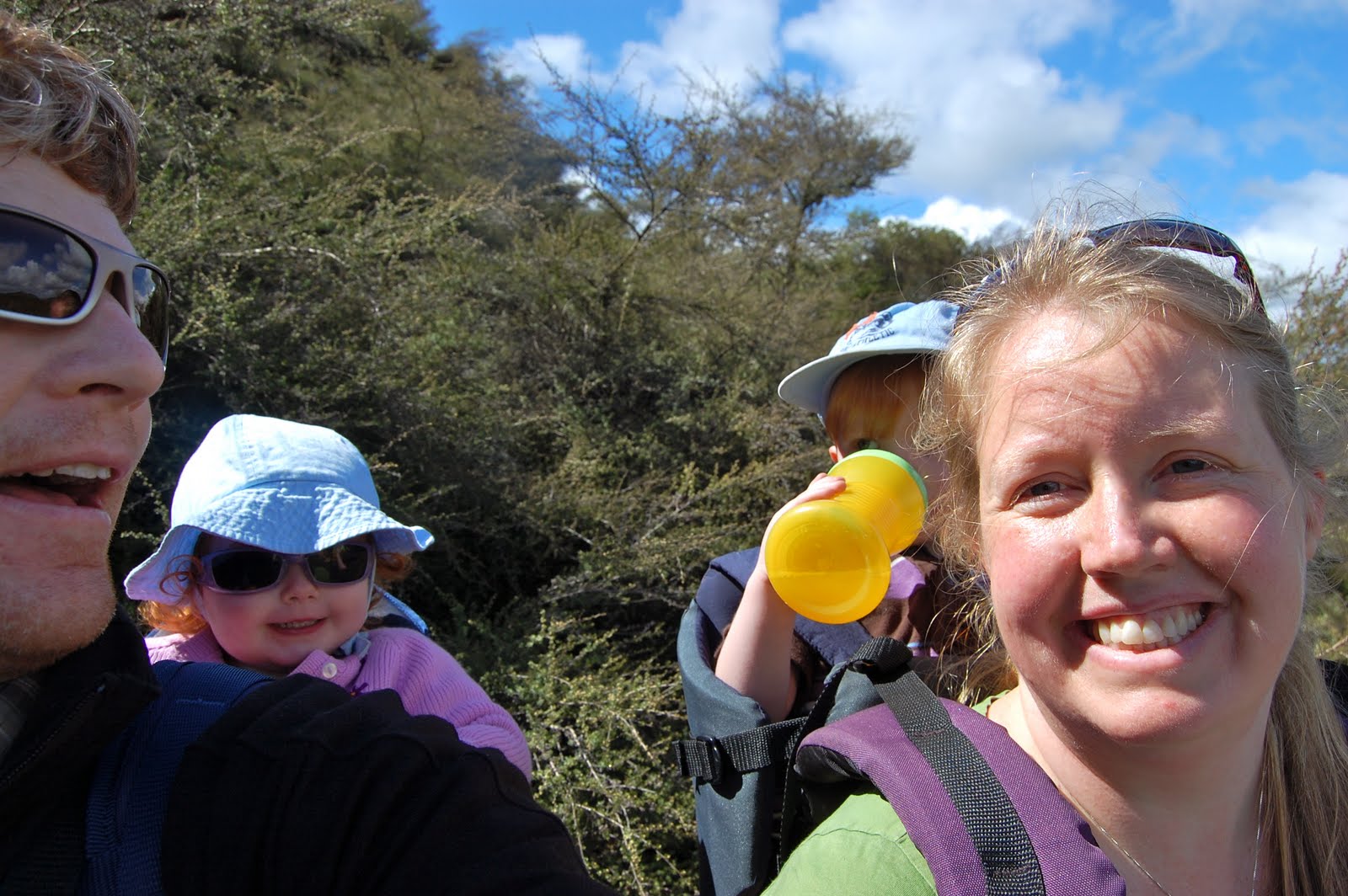 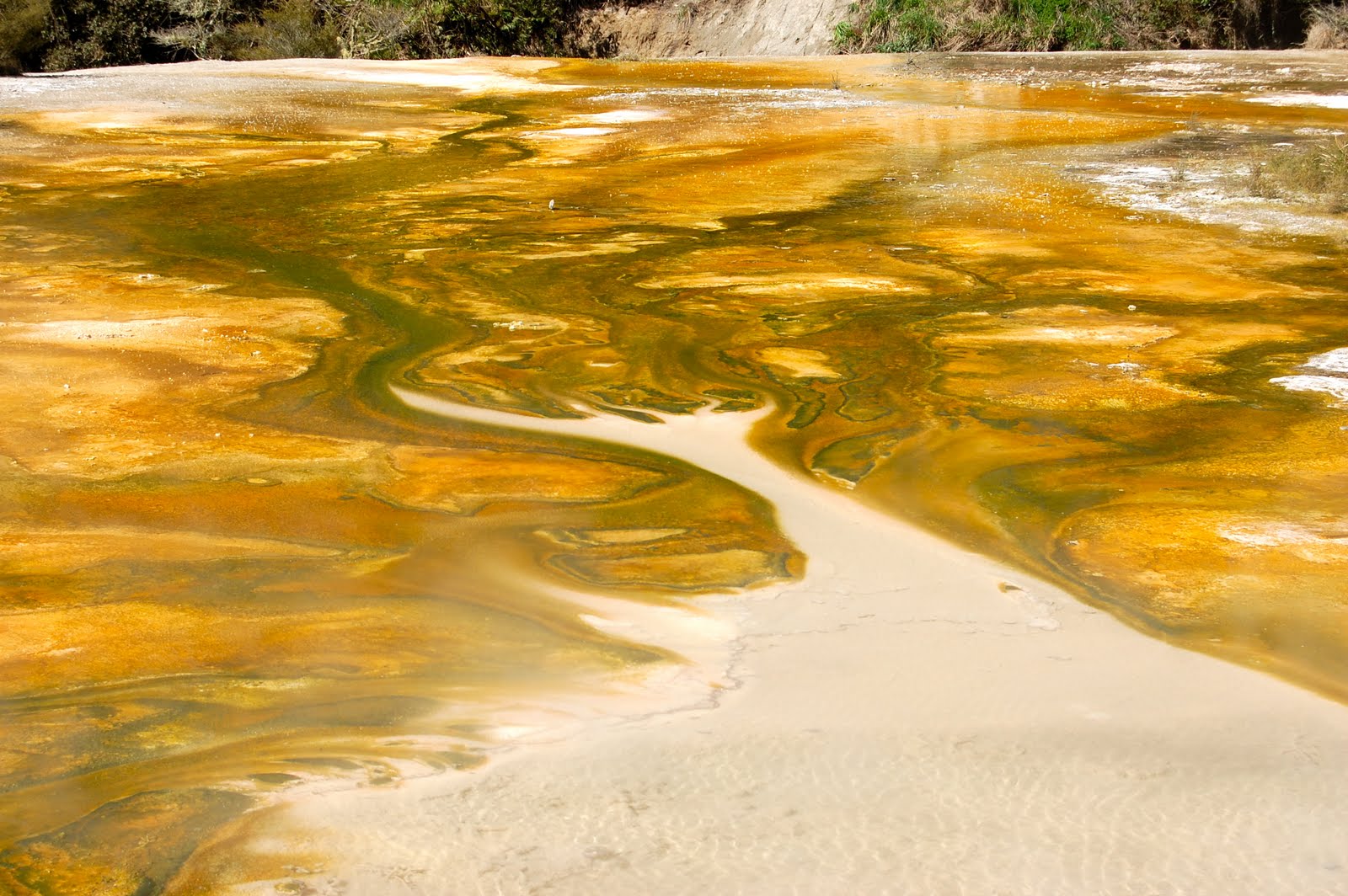 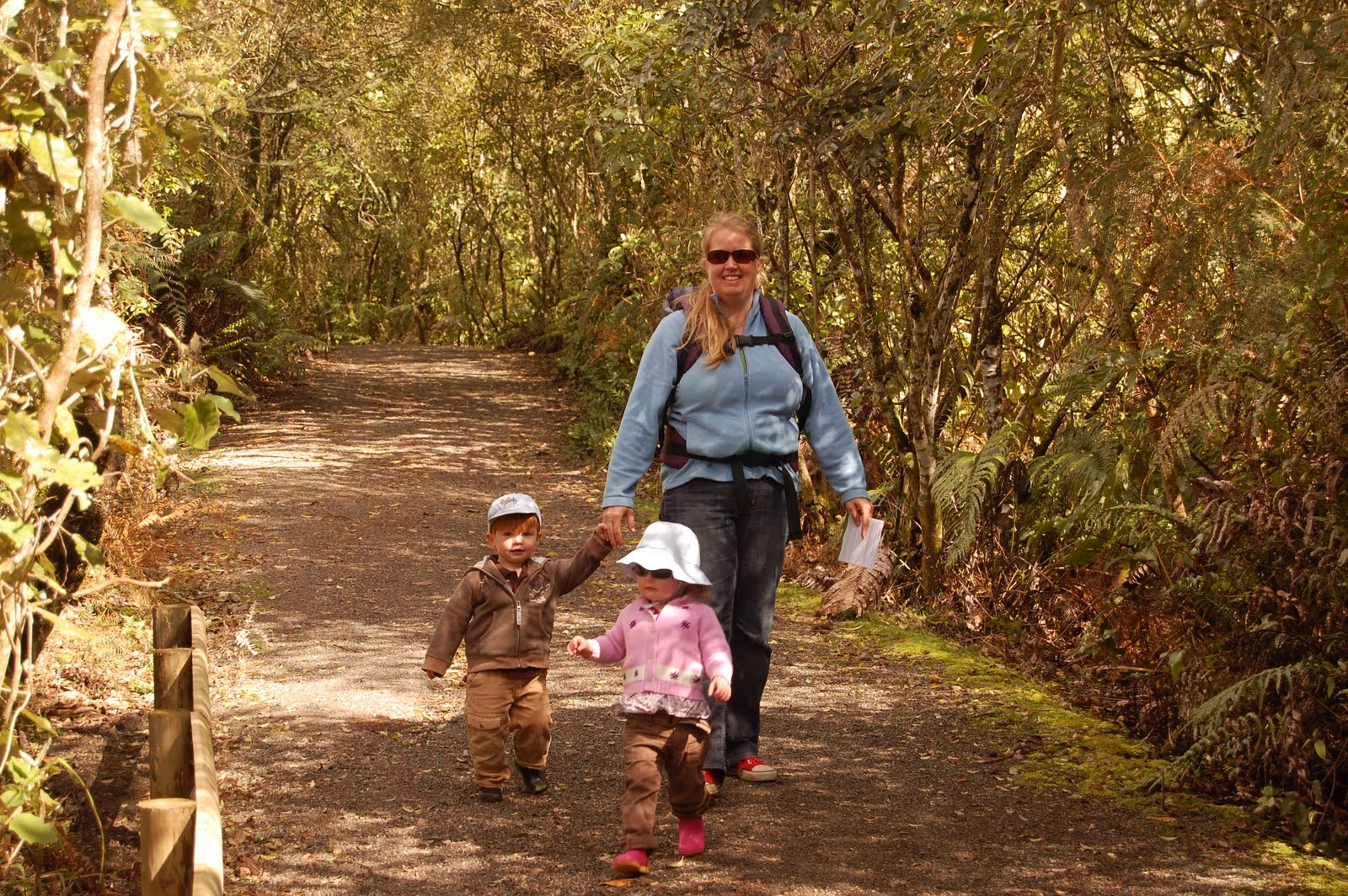 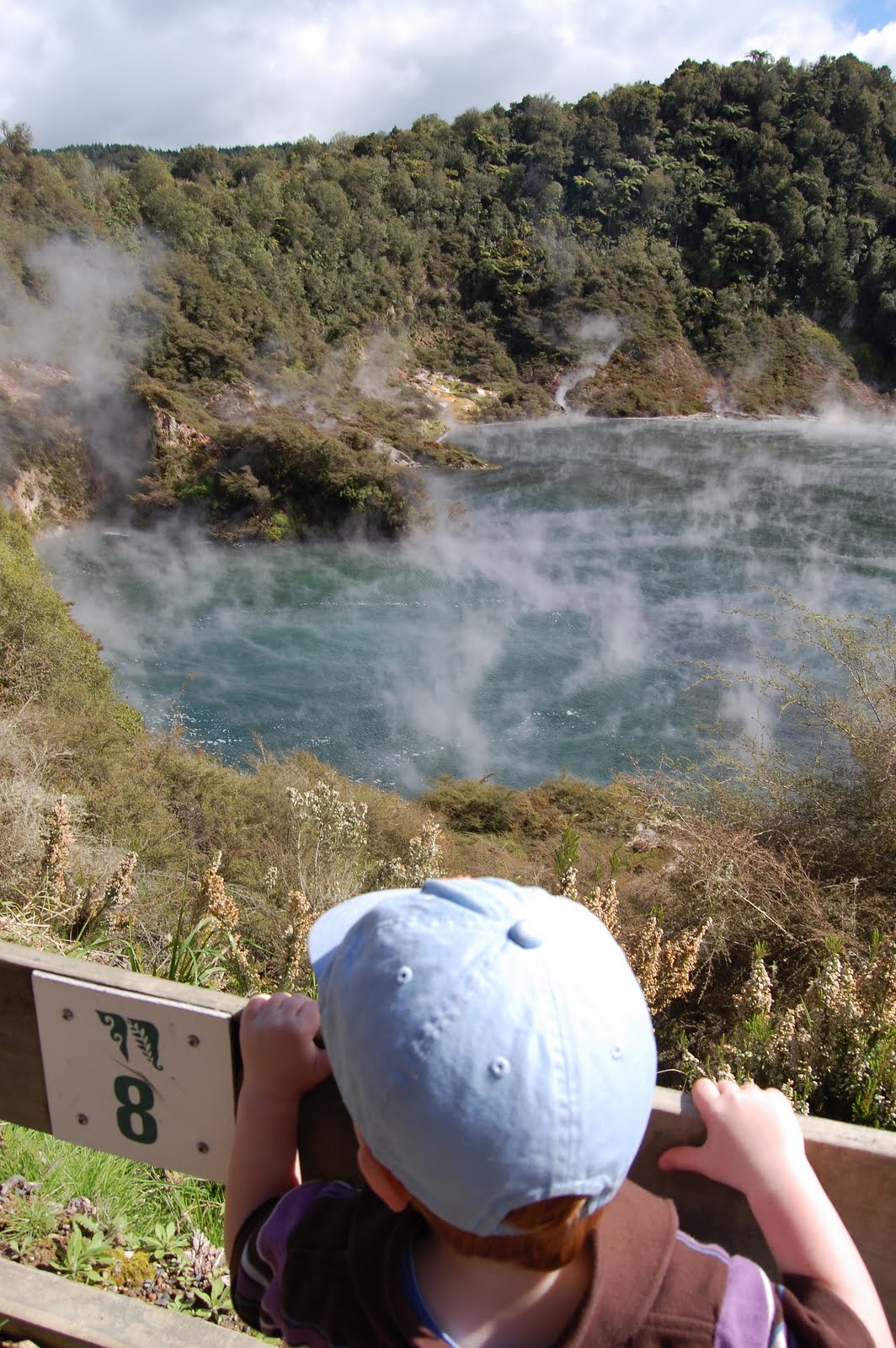 Posted by rusted sun at Friday, September 24, 2010 3 comments: Links to this post

Labels: activities for toddlers in Rotorua, toddlers, traveling with kids in New Zealand

While in Rotorua, we went to the Waikite Valley Thermal Pools, which are fed by a boiling hot spring (the water comes out of the ground at 98 C). The hot spring water is then cooled through a pond/plumbing system and fed into pools of varying temperatures. So you can choose a pool with temperature of your liking. With a constant supply of boiling spring water, they drain the pools each day and refill, so the spring water is fresh.


With the hot spring water plumbed to pools and tubs, it wasn't quite the adventure of hiking to Diamond Fork hot springs or spontaneous midnight trips to Meadow, but it was definitely more accessible with our kids. And the spring water was absolutely delightful. The kids couldn't get enough of it. I was a little worried that the kids would get bored with sitting around in the hot springs, but they loved it and didn't want to leave when it was time to go. 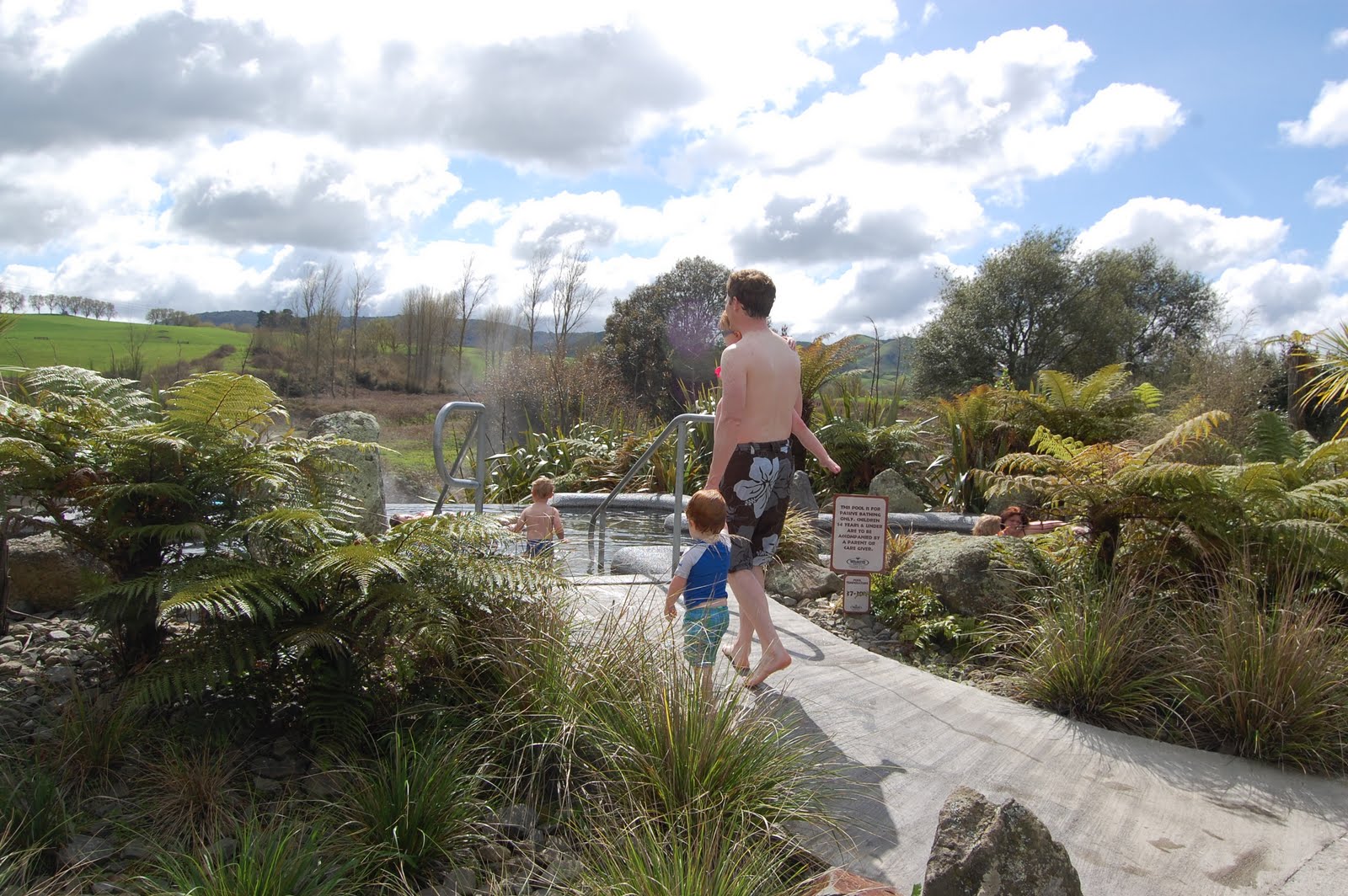 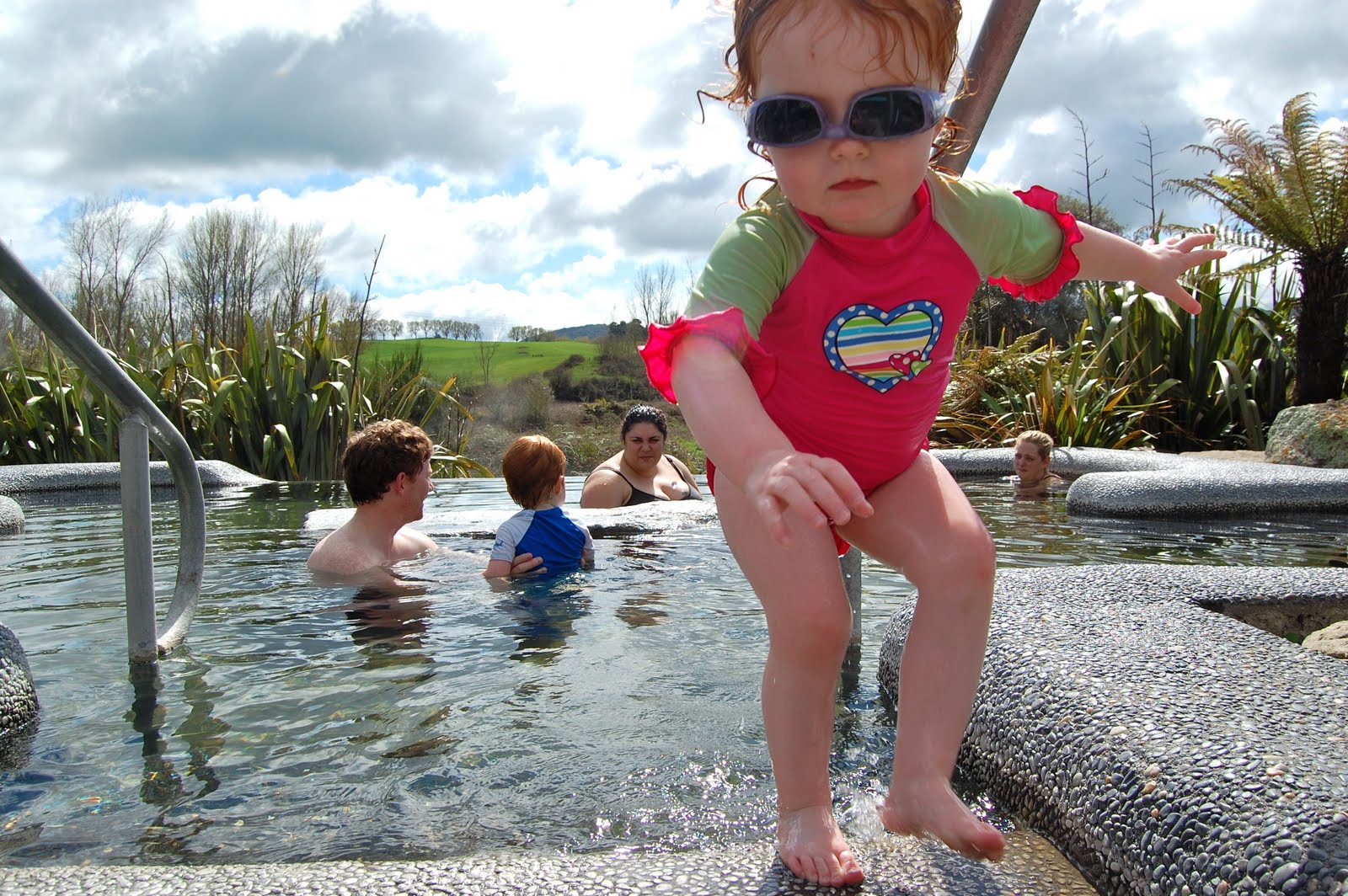 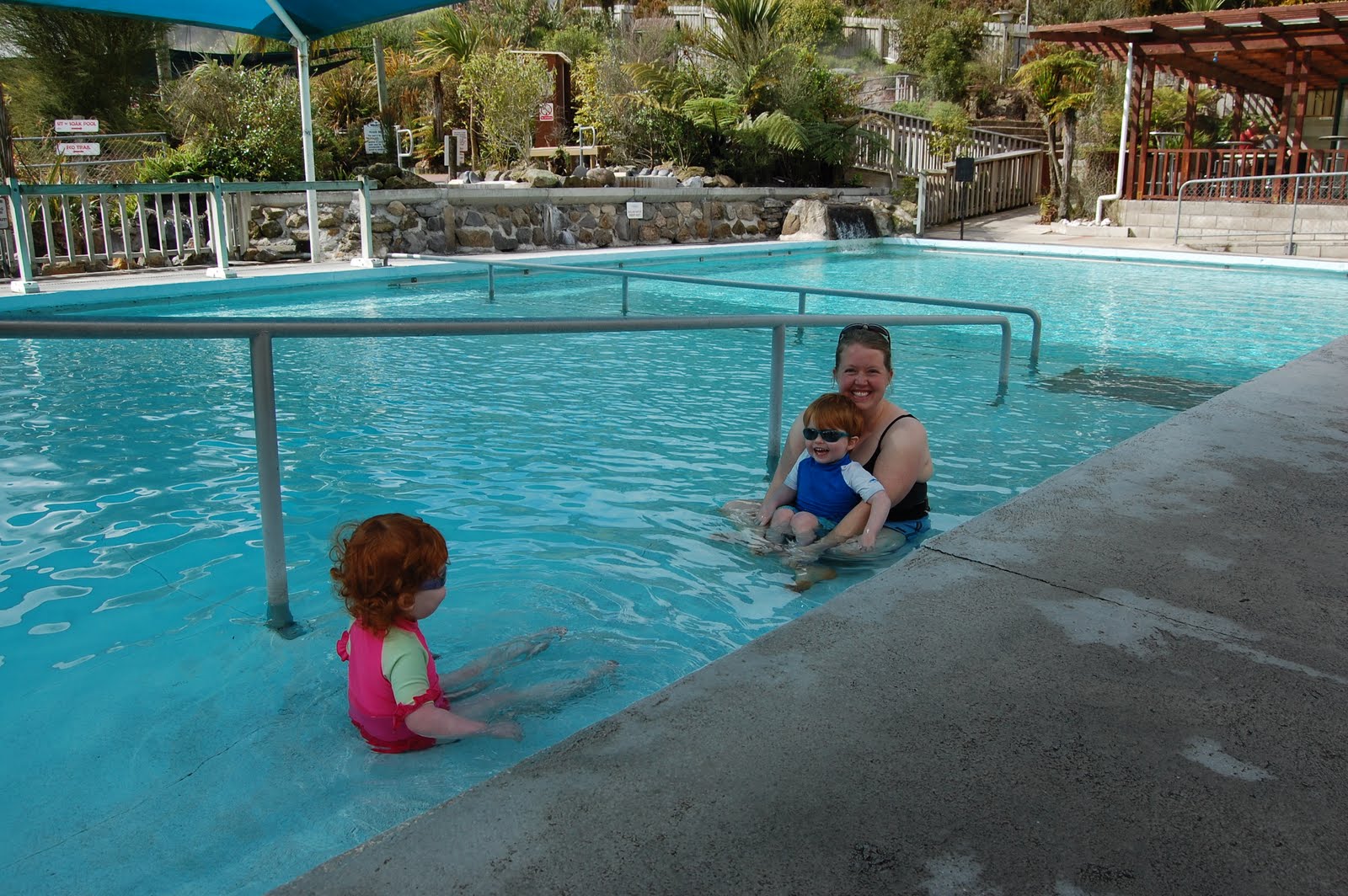 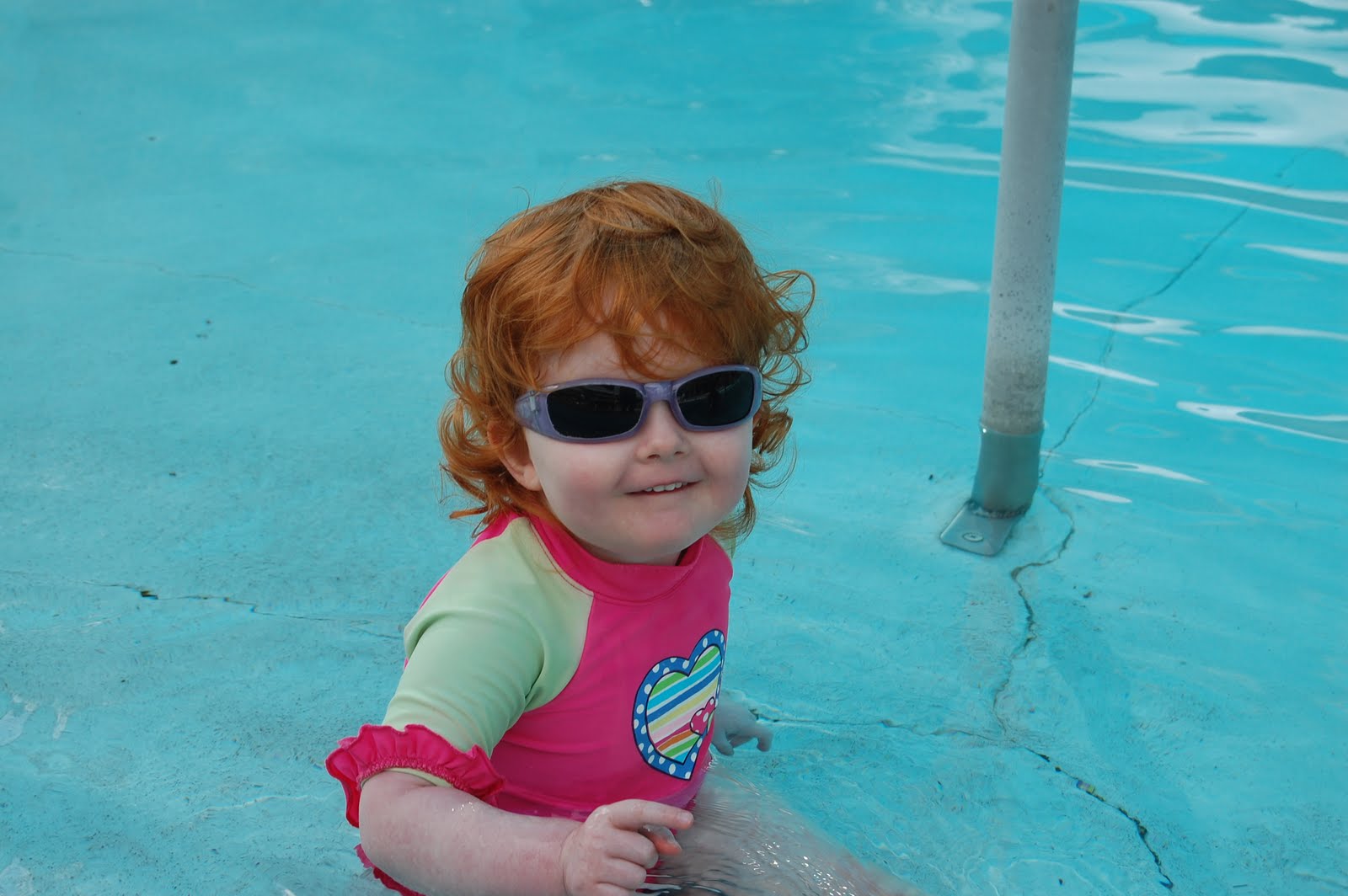 The day after we got back from our Playcentre trip to Kawau Island, we took the kids on their first official Kiwi holiday (one not connected to traveling for Lonnie's work, and lasting longer than a weekend). We are thrilled to have many amazing places to see as well as much more vacation time than we had in the US. The trip included about 18 hours total of driving, lots of backpack time for the kids, and fabulous scenery.
Our first stop was Rotorua, the top tourist destination in New Zealand. Rotorua is an interesting place with natural beauty, including lakes, forests, volcanoes, and geothermal areas (similar to Yellowstone), mixed with Maori culture and a healthy dose of adventure tourism. 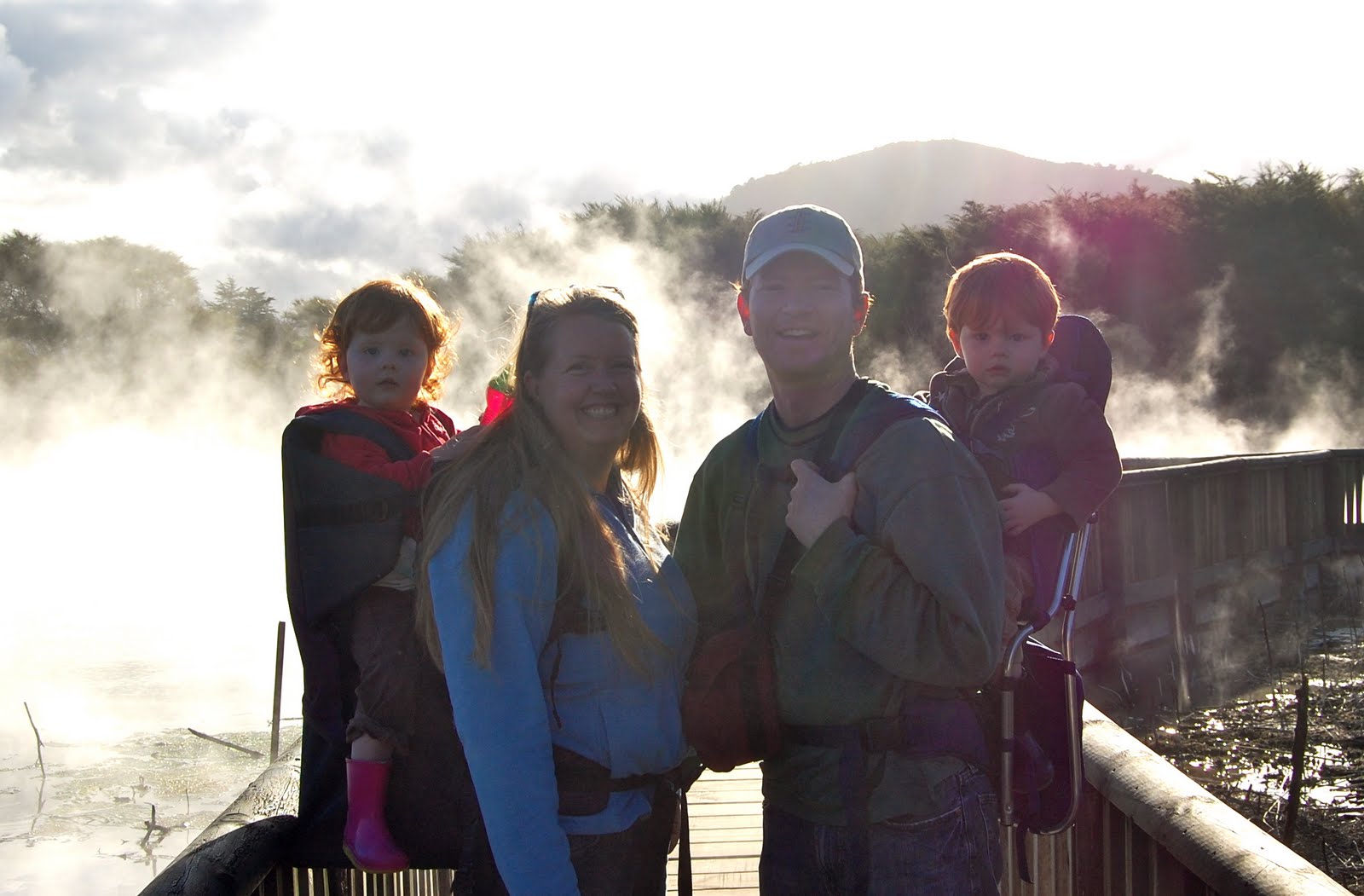 We chose to stay at a motor lodge that had a huge playground and, most importantly, farm animals that we knew the kids would enjoy. During the three hour drive to Rotorua, Max and Maya kept asking when we would get to the farm. They were thrilled with the friendly dalmation dogs, sheep (and 1 week old baby lamb), gigantic pig, alpaca, and little ponies. The cow wasn't intersted in socializing so I told them he was grumpy. They proceeded to talk about the grumpy cow for the next two days (Maya: "cow grumpy"). 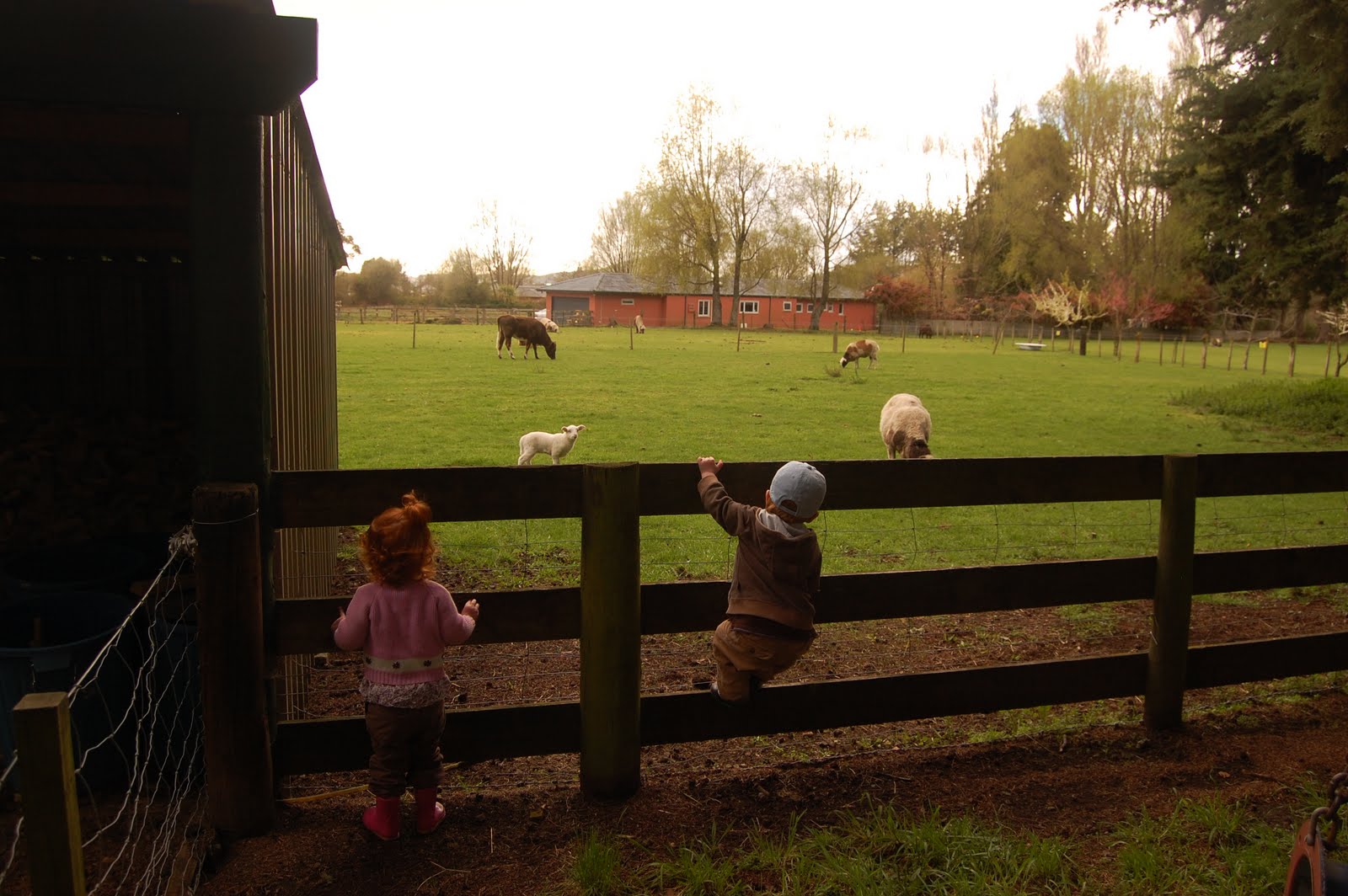 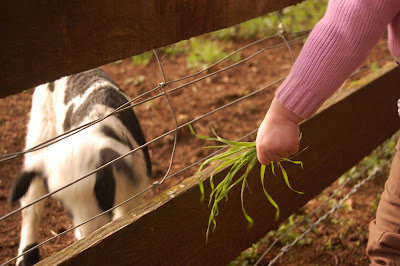 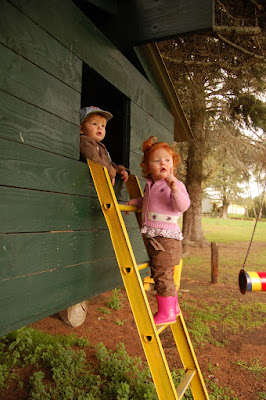 Posted by rusted sun at Wednesday, September 22, 2010 3 comments: Links to this post 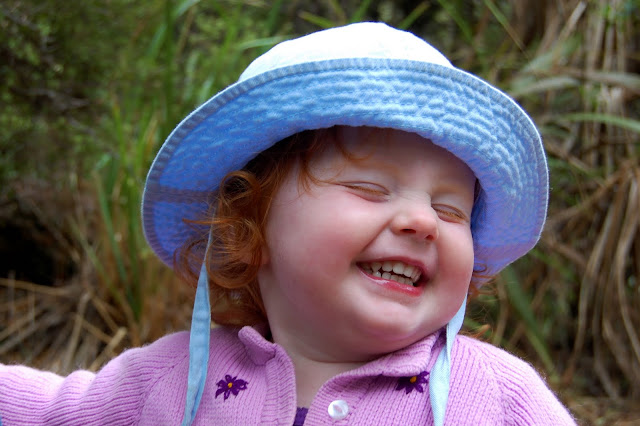 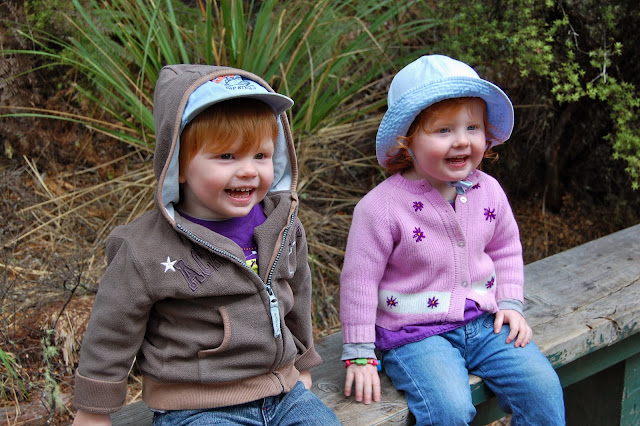 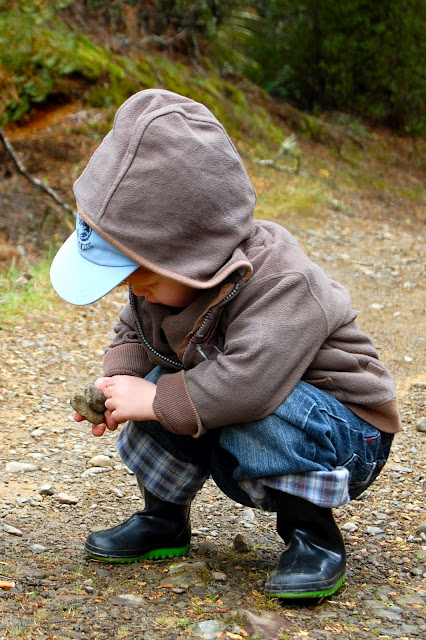 Posted by rusted sun at Tuesday, September 21, 2010 No comments: Links to this post