I had another ultrasounds scan today.  Baby is doing well.  Lots of movement.  Plenty of amniotic fluid.  Looks like he is going to be a big one.  The sonographer estimated he would weigh 10 lbs +/- 24 oz.  That is quite a range, but still means he is going to be a nice chubby baby.  :)
Posted by rusted sun at Thursday, June 23, 2011 5 comments: Links to this post

But waiting patiently.
Posted by rusted sun at Thursday, June 23, 2011 2 comments: Links to this post

...just ask the little guy in my nest.  He isn't interested in coming out.

Yesterday, in New Zealand, it was my birthday.  If the little guy had been born on June21st, in New Zealand, he would have been born on Winter Solstics.  I was born on June 21st in New York, I was born on Summer Solstice.  While the novelty of sharing a birthday would probably wear off, it would have been pretty cool to have been born on the same day on opposite sides of the world.  We didn't plan anything for my birthday because we thought we would be at home gazing lovingly at our new little boy.  But some kind friends stopped by for visits, which made the day special.

Even with exact same estimated due date it looks like Max and Maya and our Lil' Slugger (with the way he likes to punch me in the gut I think this might end up being his actual name) will be born at least a month and a half apart.  Amazing. When I was pregnant with the twins I was diagnosed with cervical incompetence and was given a cervical cerclage.  It seems pretty funny now that I am "over due".  Who is incompetent now, huh?

I finally had some extended nesting instincts kick in yesterday (not that I haven't made previous attempts, that have promptly been un-nested by a loving brother and sister who also wanted to help).  I packed my hospital bag.  With the help of a friend I finally installed the infant car seat.  Then I cleaned out the closet in the baby's room...which hadn't been organized since we moved in and I tore the ligaments in my ankle.

I meet with my midwife, Sharon, this morning and she said that I am dilated to 4cm.  Great news given that I haven't really felt much pain.  I went with the kids to Playcentre today, helped out some but not a lot.  It was nice to keep occupied and not have to entertain the kids.   Hoping for a peaceful delivery.
Posted by rusted sun at Wednesday, June 22, 2011 2 comments: Links to this post

On my EDD at Playcentre I decided to celebrate being full-term by letting the kids paint my belly.  I had seen some pretty interesting photos of pregnancy belly paint.  This painting turned out a big different, combining the artistic talents of ten kids, who especially liked to stick their little paint brushes into my belly button.  The painting started out with just Max and Maya but soon involved almost all of the kids at  Playcentre that day. 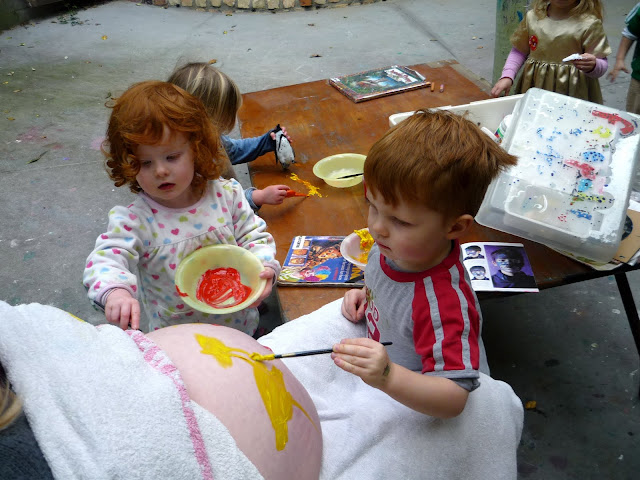 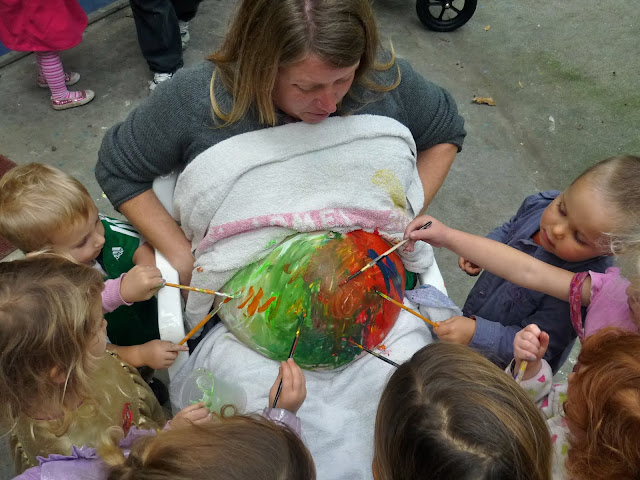