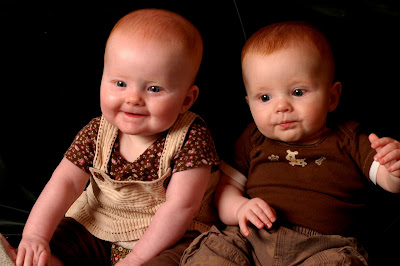 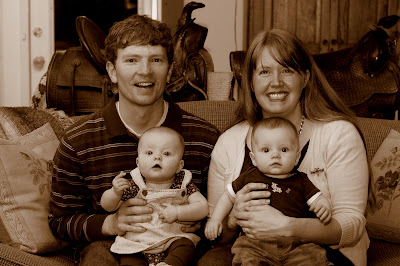 Ann took some photos of us while we were in Utah. We especially liked that she happened to have a Texas themed room to celebrate our two little Texans. Thanks Ann!
http://stuckiphotography.blogspot.com/
Posted by rusted sun at Friday, December 05, 2008 7 comments: Links to this post

welcome to the table babies

Christmas has arrived early for Max and Maya. While we can still get away with it the babies are going to receive practical gifts for Christmas this year, we might as well enjoy the fact that they are just as happy with a piece of paper as an expensive toy. Santa arrived via UPS while we were gone on our trip and brought the babies booster seats. Now these aren't just any booster seats these are the new red booster seats that were just released from Fisher-Price. I've been pretty cheap about most of the gear that I have bought for the babies. Having to get two of things makes the price tag seem all the more daunting. I have been happy with second-hand toys and cribs, but I decided to splurge (it is the holidays after all) and get the booster seats that match our kitchen. So now the babies and the parents can all enjoy sitting at the table together in matching red seats. I look forward to may wonderful, interesting, engaging, happy, peaceful (I can dream can't I??) dinners together.

The babies playing with their carrots and oatmeal. 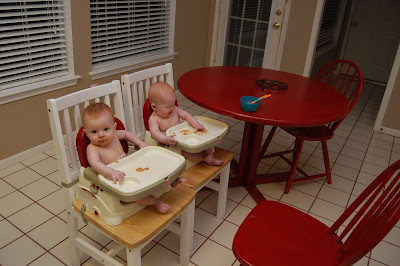 I love Max's face in this photo. 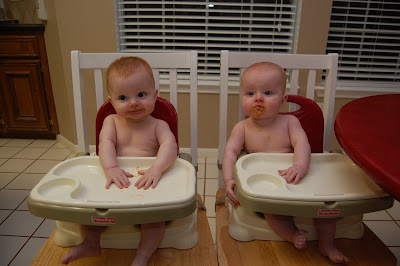 We are ready for some food mom! 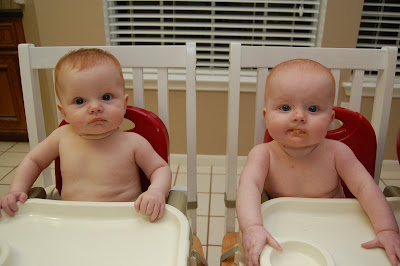 Max and Maya enjoying pleasant dinner table conversation.....
Maya: "What do you think about Obama's cabinet picks so far?"
Max: "I'm impressed that he is keeping up his promises to chose the best possible candidates without regard for political loyalties, he reminds me a Lincoln and his team of rivals...very impressive, I must say"
Maya: "I agree, very impressive"
Max and Maya: "Um, excuse me Mom, but can we please be excused from the table?" 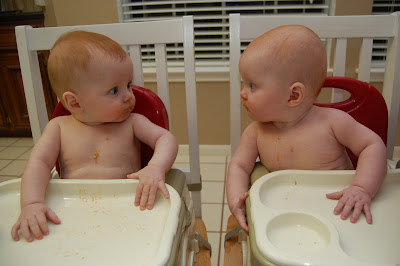 Posted by rusted sun at Friday, December 05, 2008 4 comments: Links to this post

We just got back from a great trip to visit family and friends in Utah over the Thanksgiving holiday.

This was the babies first trip outside of Texas...or even really outside of the Houston area. We were more than just a little bit nervous about the flight. The babies did fairly well. They didn't cry or even fuss on the take-off and landing, it actually put them right to sleep. On the way out to Utah we were even fortunate enough to get an extra seat so we were able to take one car seat on board which allowed Maya to sleep in her chair and then Lonnie and I were able to take turns holding Max.

We don't have any photos of us on the plane or awkwardly trying to get through the security line or waiting at the airport. Our hands were full enough as it was. I will also spare you the details of me trying to use the airplane bathroom while holding a baby in my arms.

Some advice on flying with twins:
1. Give both babies to one parent to walk through security (make sure to take off your shoes first) then have the other parent put all the gear and bags through the x-ray machine.
2. Pack two diaper bags, there is a good chance you will get separated.
3. Fly at a time of day that your babies are most likely to be in a good mood.
4. Bring a couple of bottles, even if you nurse. You might have a hard time nursing while in your seat or you may not be able to get to one of the babies if the fasten seat belt sign is on for a long period of time.
5. You and your husband can not sit on the same row. There is only one extra oxygen mask in each row (in our case this was also only on the C/D side of the plane) so only one lap infant can be in each row of seats.
6. There is a good chance that even if you reserve seats that you will be reassigned when you get to the gate so arrive early.
7. Hope that you sit next to someone who has had children, preferably a grandmother. (The poor single businessman who say next to me on our flight home didn't know what hit him.)
8. Consider sitting a couple rows apart, that way your neighbors won't have to deal with two crying children.
9. Go to the bathroom, eat and drink BEFORE you get on the plane. Trying to do any of these things while holding a wiggly baby in your arms is almost impossible.
10. Changing a diaper on an airplane is next to impossible. I had to change Max's diaper while he was laying on top of the toilet lid. Poor kid thankfully didn't fuss too much about it.
11. Different airlines have different policies on the documentation required for flying with an infant within the US- Delta doesn't require anything , Southwest requires a birth certificate or vaccination record.
12. On most airlines, currently, car seats and strollers do not count as baggage. You can take them up to the gate and check them right before you get on the plane.
13. Try to fly in the middle of the day or on Saturday during non-peak travel time. Flying with babies is much easier if the plane is not full.
14. When you check in ask if the flight is very full. If there is a possibility that there will be extra seats bring the car seats with you to the gate. We have had very good luck with being able to bring the babies' car seats on the plane. Car seats are not only safer, they also give the babies a great place for the babies to sit, nap and give the parents an extra set of hands.
15. Make friends with the flight attendants. 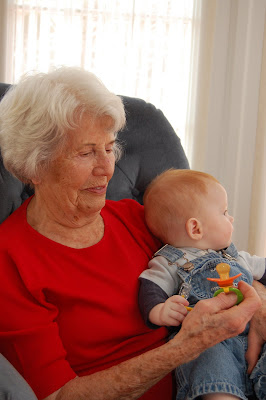 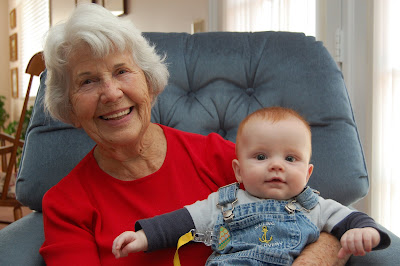 While we were in Utah we were also able to visit with my great-aunt Virginia. Virginia is my grandmother's sister. We had a wonderful time talking with Rex and Virginia and singing along with the player piano.
Posted by rusted sun at Tuesday, December 02, 2008 No comments: Links to this post 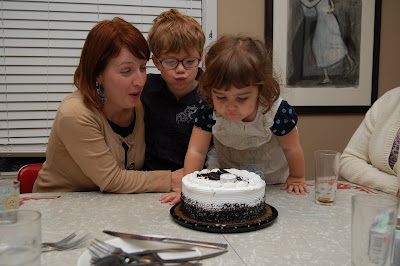 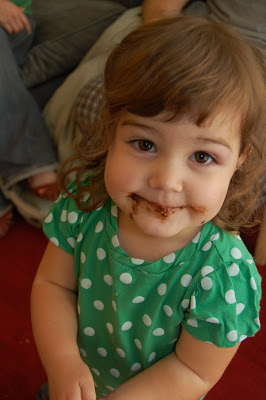 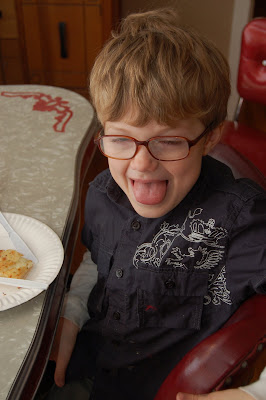 Posted by rusted sun at Tuesday, December 02, 2008 No comments: Links to this post

We had a great gathering of friends at Ann's house while we were in Utah. Thank you to the Hinckely-Stuckis for welcoming us all into your home. It was so nice to get caught up with great friends. Brian made wonderful apple pie, homemade bread and pumpkin soup. We had a wonderful post-Thanksgiving feast.

All together I think there were 19 adults and 15 kids (if you count the ones in utero).
Alisa and Lonnie, Max and Maya
Ann and Brian, Collin and Jane
Tiffany and Mitch, Timshel and James
Leah and Partha, Om and almost-baby-#2
Andi and Marco, Xanny and Zina
Dave and Jaclyn, McKeenen and Gabe
Emily and Lyle, Eva and baby-on-the-way
Malcolm and Veronica
Tara and Jeff
Zendina and one of her sweet babies

Thank you to all of you for coming out and spending some of your holiday time with us. We missed those that weren't able to come. 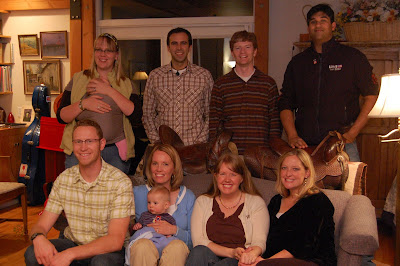 This photo is of those who made it all the way to the end of the party. We should have thought of taking a photo earlier on in the evening....but most of us had our hands full with food and babies. Top: Ann and Jane, Malcolm, Lonnie, Parth Bottom: Dave, Jaclyn and Gabe, Alisa, Leah 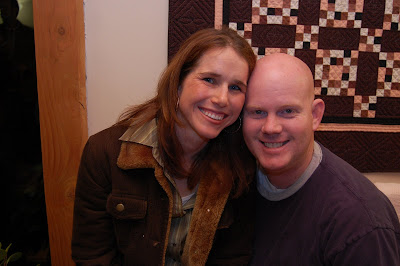 A photo of my long-time friend Tara and her husband Jeff. I actually set the up on their first date in 1994, on their second date almost ten years later and they finally decided on their own to start dating again and got married in 2006.

This post might also be in commemoration of love connections. Not only did I set up Tara and Jeff but Jaclyn and Dave also meet each other at this same house at one of my birthday parties. I also introduced Leah and Parth to each other. I guess you could say that I like to keep my friends linked together by having them marry each other.