sleep and the olympics 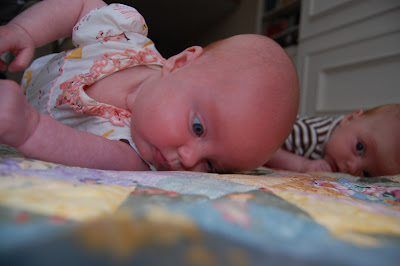 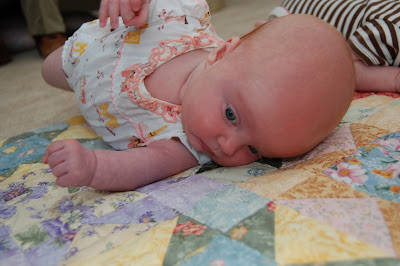 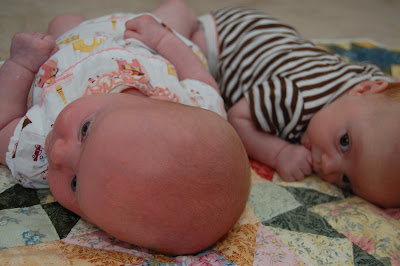 We have been using our late night feeding times to enjoy the Olympic Games. In honour of all the gymnastics we have been watching Maya decided to roll over from here belly to her back for the first time. She did it four times yesterday! Max doesn't seem quite as interested because he is quite content laying on his belly. Maya on the other had really dislikes laying on her stomach and has decided to avoid her tummy time by rolling on to her back.

Max's big feat of the week is that he slept for almost 8 hours last night. (Maya has already had a couple of night's long sleep) I woke up several times uncomfortably wondering when they were going to wake up, but I was not going to wake them up.

We also had a weight check at the doctor's office yesterday. Both babies are over 11lbs.

I think they both deserve a gold medal.
Posted by rusted sun at Friday, August 22, 2008 3 comments: Links to this post

What's in a name

Names are kind of interesting. Alisa and I had a fun experience of trying to think of two names at one time. Obviously, we were entertained by the thought of naming these kids enough to make a poll on our blog. (By the way, I was pretty surprised that Max was the most popular name on our poll. I knew Tyrone wouldn't win, but I didn't know that Max was so well liked. Even before doing the poll, we had pretty much decided that Max was the name we liked most. But I digress...)

I really like the names Alisa and I settled on for Maya and Max, even though both of their names are sourced from Alisa's life (at least I got to contribute the last name). The names Maya and Catarina come from Alisa's time living in Guatemala and falling in love with Mayan people and culture and, in particular, the Mayan community of Santa Catarina Ixtahuacan.

Alisa claims that I originally suggested the name Max, although I don't recall doing so (I did suggest many names along the way that were thrown by the wayside). (By the way, Max is not short for any thing, like Maxwell, Maximus, Maximum, Maximilliano, Maxedout, Maxer, etc. In fact, I kind of think it's odd when someone plans to call their child a certain name but give them a different first name and use their middle name [no offense to L. Tom Perry or M. Russell Ballard] or use a shortened version of the given name [Richard when they plan to call him
Rick or Dick].) Max's middle name is Elliott and comes from Alisa's great-great grandmother's maiden name. She also has a relative on the same family line whose name is Max Elliott.

We almost always refer to them by their given name, but occasionally we (or at least I) have used a couple of nicknames for them. Maya's is Butterball and came about because she often rolls up into a little ball when you pick her up. The butter part of the nickname just goes well with ball, but she also has soft, buttery baby skin. Max's nickname is Lil' Brudder and comes from a skit on homestarrunner.com about a one-legged dog named Lil' Brudder. So far with our twins, Maya has more volume in her cry, and Max has more endurance in crying. Alisa doesn't like me to say it, but Max tends to whine a little more. Thus, he got the nickname of Lil' Brudder because he's Maya's little brother, he can make it on his own, "he's got the heart of a champion", and he probably could power a small city with his whining. Lately, Max has been growing out of his whining so the Lil' Brudder nickname may get tucked away, but it certainly helped us laugh when he was whining away. After all, he's going to be a quarterback when he grows up. :)